John and Pops began playing checkers sometime last year, typically using “new” rules that favor John. Well lately John has been missing the game, so April helped him and the others make a checker board and checkers.

I was busy with work, so Philemon volunteered to play checkers with John. Philemon won with the real rules one time, then John beat him three times with his own made up rules – big surprise.

When they were choosing colors, John said, “I’m black”, to which Philemon replied, “no, I’m black” and pointed at his arm. Wait…does that mean that it is O.K. to revel in our differences, love each other, and just appreciate that we are all God’s children rather than being hung up on race all the time? Say it ain’t so! 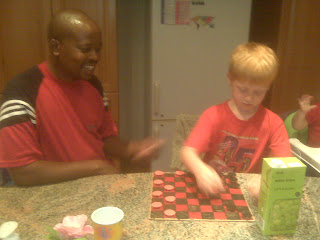 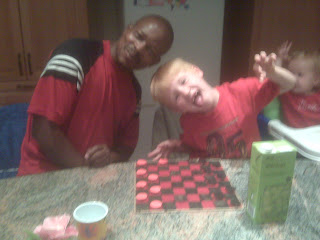