This evening I was picked up at the house by Gordon and Francis – the latter is a full-time missionary; the former, a colleague at Vodacom. They do mission work on a regular basis in townships (slums), informal settlements (really bad slums), and outreach centres that cater to, for example, refugee Zimbabweans.

I am very interested in being involved with this mission work – I find it unfortunately humorous that American Catholics will help elect a president, the most pro-abortion president in history (not to mention pro-gay marriage and God knows what else he’s in favor of that is contrary to Catholic teaching), using the justification that he cares for the poor more than conservatives do. We in America are brainwashed into thinking that poverty on an extreme level actually exists in our incredibly rich country. I was raised with parents whose income was under the poverty level; we never owned a house, we received governmental commodities in order to feed our family. That my friends is not poverty. South Africa is the wealthiest nation in sub-Saharan Africa, and this is just a glimpse of what people live like not 30 km from the mansion in which we live:

This is a clearing in Mamelodi, a township east of Pretoria where we set up equipment to show the Jesus film in Northern Sotho (a.k.a. Pedi), one of the 11 national language of South Africa. The fellow with the blue shirt and black pants is Pastor Ezekiel, the pastor of one of the churches in the area. He doesn’t live in the “organized” township; rather, he lives in a shack in an informal settlement nearby. 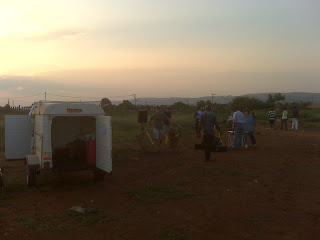 Two team members walking to the clearing. The trash piles on the left are some of the few thousand trash piles laying around. In the evening, the piles are set on fire, emitting noxious fumes, as there are no governmental services which service townships. The man in the middle is Sylvester, the youth minister for another church, whose grounds lay to the right behind the fence. The pastor of the African (something) Church is named Pastor Mondi. Sylvester can dance, boy howdy! 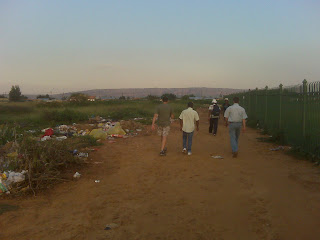 Here is the screen set up in anticipation of dusk, at which point the film will start. People are beginning to gather (a total of about 40 will stay through the film, 18 of which give their details as being interested in learning more, 5 of which ask for prayer afterwards). The VW bug on the left belongs to Billy, another pastor who hails from Zambia and also lives in a shack in the informal settlement nearby. 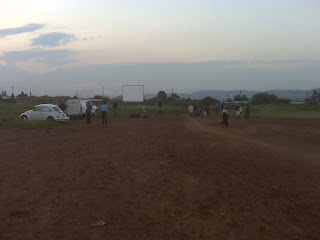 “Z” and a team member setting things up, trash piles in background (a Shebeen [tavern] which plays music very loudly is out of the picture on the right. 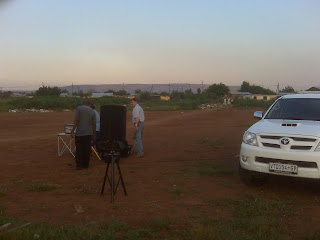 Children gather to watch the film. There’s a reason why Jesus said “let the children come to me”. The innocence and happiness on these children’s faces reminds us that God loves all of us, not just those of us who can afford to build $20 million dollar churches to remind ourselves how holy we are and how much, dagnabit, we care for the poor. Well, “care” in the sense that we pay taxes and let politicians do the caring for us. 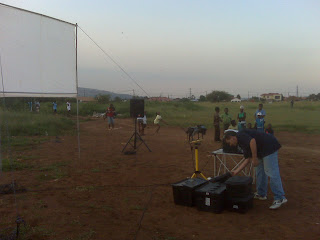