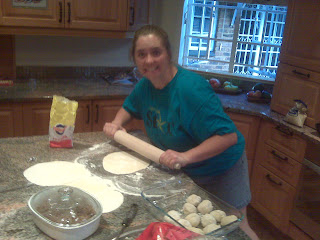 I don’t know how many of y’all know this, but making tortillas is an art form. April tried, now for the second time, to make tortillas tonight. She was successful in that they taste like tortillas; however, the consistency leaves something to be desired – they are quite stiff and break when we try to bend them. Still not bad considering an 80-year-old Mexican grandmother never taught her and she is learning from trial by error!

The Mexican rice she made was pretty good, as were the beans, although they were more like charro beans than refried. I still can’t get over the whole “Mexican food in South Africa” thing, but here we are.

South Africans seem to have a wide range of tastes in their food – from Boerwoers (traditional sausage – think course-ground bratwurst) and pap (think grits minus any liquid whatsoever), to American-style hamburgers (most of Wimpy’s burgers consist of double-meat, mayo, cheese, and whatever else fatty they could find) and, yes, Mexican food, which resides in its own specialty section in grocery stores. Granted, it is all Old El Paso brand (which I hear is made in New Jersey – get a rope!), but it still tastes like Mexican food. That reminds me, I need to take some pictures of the offerings at grocery stores…

My favourite thing, however, has to be that the cheeses here are inexpensive and varied. A huge tub of Feta is 2-3 bucks, blocks of blue cheese (Bavarian, Dutch, Belgian, and other varieties) are the same. It is truly a cheese-lover’s paradise!