Today was a pretty mellow day. I worked some in the morning, then we all watched Mr. Bones (until Mary and Vincent were excused from the room for playing rather than watching). 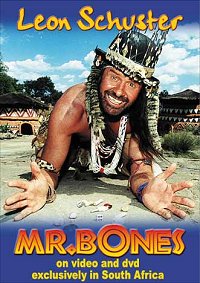 We had some excitement in the middle of the movie (unrelated to the movie, but more about that in a minute) – Vin decided to play with a light bulb, threw it, broke it on the parlor floor, then sliced his thumb up right nicely when he tried to pick up the pieces. Bleeding profusely, he and Mary tried to hide what happened by going around the house wiping blood on various towels, until they realized the bleeding wasn’t stopping and came and told us. Sigh.

The movie consisted of quite a bit of cursing, people’s arms and heads going into animal orifices, people getting smacked with poo, folks flying through the air, and other typical foreign slapstick activities. All April and I could do is shake our heads and roll our eyes throughout the movie. This movie is the most popular movie in South Africa ever, so popular in fact that part two came out last year but cannot yet be found on DVD. I guess I’ll rent it and put myself through another two hours of torture… John, by the way, loved the movie. Of course – he’s seven.

After the movie and quiet time we ate leftovers for supper. Vin is my clone – he ate the rest of my “tanglewood” goat cheese I got at Irene Market last Saturday. Philemon came in to say good night and bring in his plate (I guess it is taboo for him to eat with us – he runs out to his flat immediately after making a plate of food). Of course he is welcome and maybe, after he get to knows us, he’ll feel more comfortable.

The kids love to tell him “good night” in Zulu – lalagathe. They say it over and over and run to give him hugs. This evening they decided to hug him all at one: 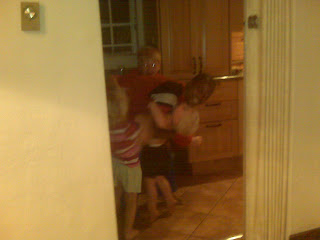 They were all shouting “lalagathe!” at the top of their lungs and climbing on him. Hilarious!