Did you know you can be dieting and still drink red wine (but not beer)? Neither did I! Being that we’re in South Africa, we decided to take advantage of the ridiculously low wine prices as well as educate ourselves on wine (read: try a bunch of different styles and brands and see which ones we like, on the off chance that they are available in the States).

To that end, I’ve decided to catalogue our wine tasting, along with what we think. No, I’m not going to say that something tastes like currants, raisins, tannin, etc. I think people make that crap up to tell you the truth. I’m simply going to say whether or not we liked it and why!

So far, the #! favourite for April has been Beyerskloof (don’t know what year, probably 2006 or 2007) Pinotage. She really likes the Pinotage variety over any others she’s sampled; it’s typically not so dry that it wicks all the saliva from your mouth. Anyway, onto the pics.

The first two we tried (at the house, not at a restaurant like the Beyerskloof) were Boland Kelder Pinotage 2007 and Douglas Green Pinotage 2007. The BK was decent, pretty dry, tastes nice. The DG was even too strong for me – very, very dry, and felt like I got punched in the nose becasue it was so pungent. 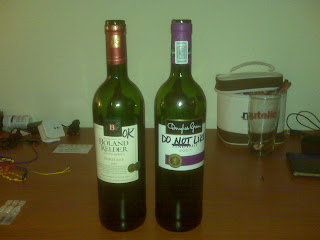 Here we have Jacobsdal Pinotage 2002. This was like the BK, pretty nice to drink with a meal. Not overly strong or dry. 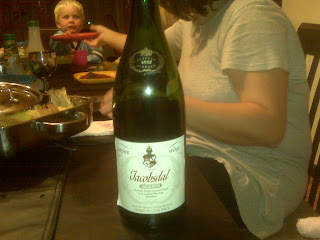 Final note – all these bottles cost around R50 or less, usually more like R45. That’s less than five bucks a bottle, folks. Wow. I found a Beyerskloof online that I could get in Texas and it was $15. Yikes.