We had a fantastic evening planned for today – Annie and Erin rode the bus into Pretoria so that we could watch a soccer game on Saturday, so they stayed with us for the weekend. We decided to make Mexican food, but actually Tex-Mex. I made chicken and beef fajitas, and even cooked portabella fajitas for any vegetarians amoung us. Gorden and Francis came over, as did Gareth. A great time was had by all! Hopefully I have pics on the other camera that I can post – for now, you might be asking yourself, “self, how would one go about making a fire/braai if one were in South Africa?” Well look no further!

They don’t use lighter fluid here – if they do, it’s called “petrol” and comes out of a can, if you catch my drift. Instead they use “fire starters” – basically paraffin soaked in some flammable (or inflammable if you will) liquid. You break off little pieces and put them on your self-built fire pit (yes those are scrap slate rocks and bricks that I fashioned into a pit). 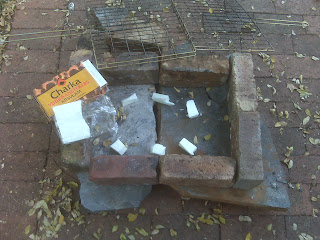 Then you slap on some charcoal – they have briquettes as well as chunk charcoal (here is chunk, but I put briquettes on the top later). 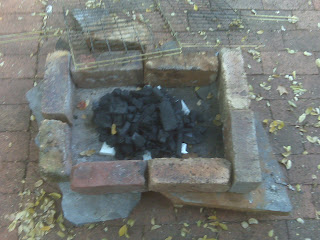 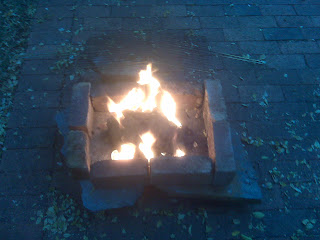 A little dark, but you can see my camping grill placed over the fire. I cooked that meat to perfection – I am so awesome over flame if I do say so myself… 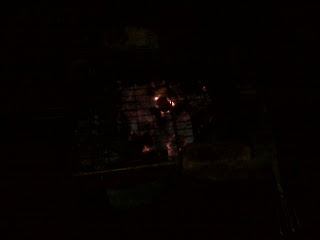