Saturday! First I made pancakes like always – I always show them done and being eaten, so here they are in the middle of being made! Sarah’s hair is long enough now to put up in a ponytail! 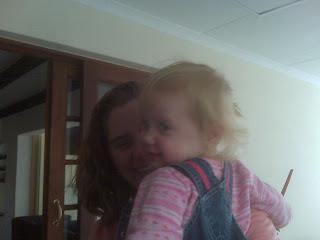 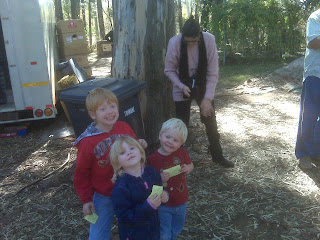 …to ride the camels. 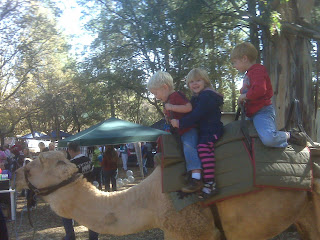 This booth sells extra jumbo eggs – eggs with two yolks! They are fantastic but a little pricey and definitely not low-fat! The signs he has read: “The man with the large eggs”. Double entendre? Y’think? The sign on the left reads: “Blue Bull Eggs”. The Blue Bulls are the rugby team that play in Pretoria in the Super 14. They were playing in the final game against a team from New Zealand called the Chiefs at 17h00 today… 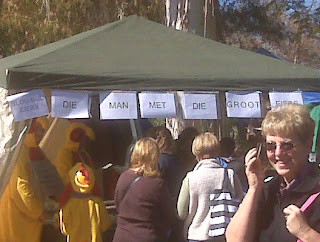 …and I got to go! Tickets for this game sold out in less than an hour, and I got invited to a box seat by Gareth. Everyone said this was a once-in-a-lifetime opportunity.

Here is Gareth on the right – Pedro, another colleague from Vodacom, is the one pointing. I wonder if he’s pointing to the lights in the stadium that were off since the stadium lost power for about 20 minutes right around the time the game was supposed to start. 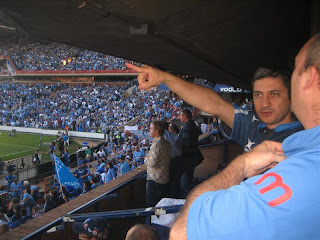 The box had food and liquor, and a TV to see replays! 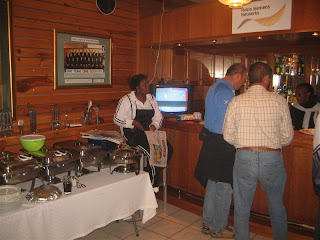 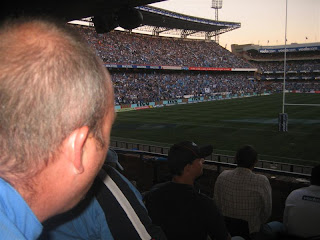 Finally the lights came on and the Bulls were introduced with pyrotechnics and everything! They won the game handily, 61-17. Quite an embarrassment for the Kiwis. 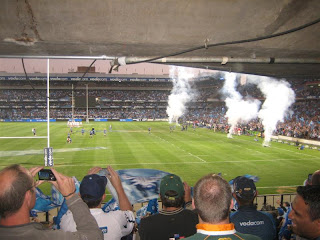 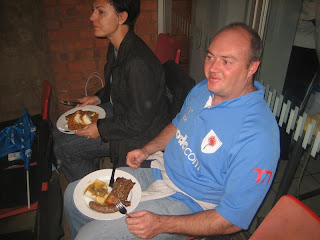 Gareth dropped me off at the church we attend, St. John Fisher. They were having a Mamma Mia Disco Party. I wasn’t too terribly late. April and I started with the red wine they had there, Two Oceans Cabernet/Merlot blend. April thought it was too woody and dry – I liked it (like always). 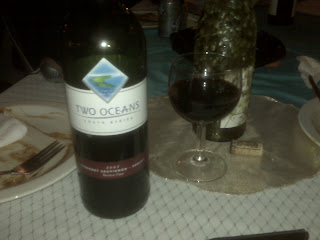 One of the fellows running the door allowed us to sit at his table, and let us sample the bottle of wine he brought – Oude Denneboom Eland 2007. April really liked this one, as it had quite a bit different character than the Two Oceans. Isn’t she fixed up nicely? 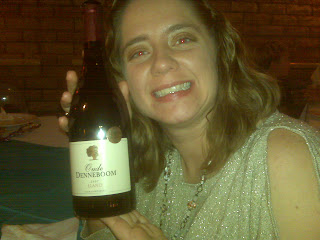 We won the dance competition (no, really – probably because we were so overjoyed that we actually went to something where there was childcare, and therefore were without the kids for several hours for only the second time since we moved here). The prize was a bottle of Colli di Catone Frascati Doc Superiore 2005 from Rome, Italy. Very light, sweet white wine which we shared with the couple sharing our table and the parish priest: 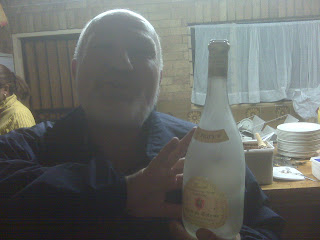 This reminded me of living on Frankford Ave in Lubbock when Bishop Sheehan would come over and bring a bottle of Cordon Negro, into which we would shove a candle, light it, then judge how awesome the wax drippings were: 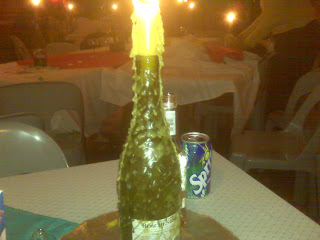