Tonight was Mexican food night, but I am seemingly slacking and not taking pictures lately, so instead I will write about our soccer trip last Saturday (May 2nd) and the wines we sampled the night before (Friday, May 1st).

Koelenbosch Pinotage 2006 was brought to us by Annie and Erin from Cape Town on their first visit, so it was fitting that we waited to drink it with them on their second! I liked it quite well; this side of dry, nice taste. April didn’t like it so much.

We then had the bottle of Spiel Pinotage 2007, which we both liked. However, since we already had a glass or two, I’m sure the tastes changed. This goes double for the next bottle, Stellenzicht Pinotage 2006. We will have to try it again because we have no idea if it was good or not, if you catch my drift. 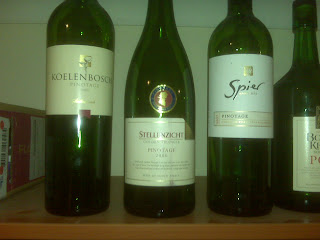 On Saturday, we drove to Joburg to hit the Kaiser Chiefs vs. Orlando Pirates soccer game. Everyone I’ve told has asked me if we’re mad, pissed (drunk), or crazy. Turns out most white Afrikaners have never been to a soccer game, for reasons that became obvious. First, however, we had to find a place to park. What luck – there was a playground next to it (which would come in handy after the game, since the entire lot was filled with cars parked BEHIND us, so we had to wait until everyone left). Annie snapped this pic of Mary sliding on the type of slide I remember from grade school – 12 feet tall with no safety equipment to speak of! That’s what I’m talking about! They also had a carousel / Merry-go-round that would chop off your arm if you stuck it in while it was going full-speed. Sweet! 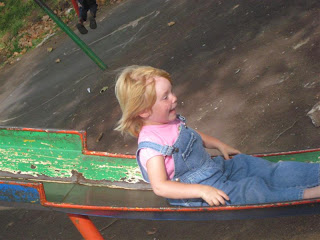 We walked from the playground through East L.A. (downtown Joburg), over to the stadium. Mental note – don’t attempt this at night. 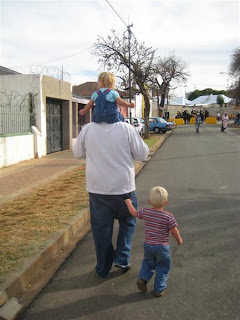 As we neared the stadium, the din became louder and louder. The horns at soccer games are famous – basically cheerleader horns which are more narrow and definitely louder. There were 50,000 folks (at least) in the stadium by the time we reached our seats: 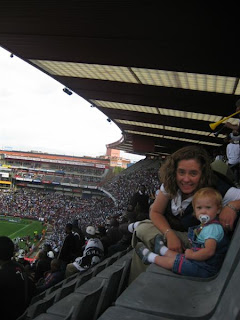 Here’s the reason no Afrikaners have seen a soccer game – we were eight out of the total 12 white people in the stadium by our estimates. Let’s put it this way – people were taking our pictures and videotaping us. I’m just sayin’… 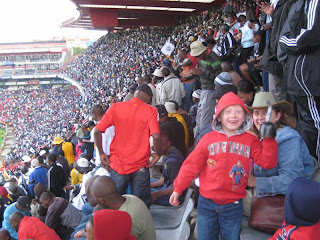 This is the footballer who was doing crazy tricks at intermission – quite impressive! We were leaving after intermission so as not to walk through downtown Joburg at night, as explained above!

All in all, a great time, a great experience. The Pirates won 2-1, if you’re interested. 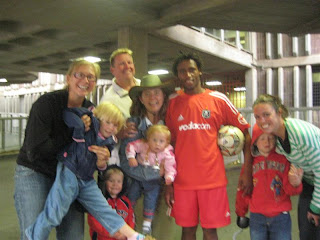