April sent out an email/Facebook plea for donations a couple weeks ago, and boy howdy did people respond! We received almost $1200 for clothing and supplies for a creche that serves a squatter camp called Phumzile Park. This particular squatter camp is situated on a dump – that’s right, a trash dump, and the shacks are made from black plastic rather than tin. HIV/AIDS is pervasive, there is only one tap for running water, and they have porta-potties for human ablution (toilets). Around 400 families live in this camp.

A couple named Diane and Lawrence felt compelled to do something to help these people – many are Zimbabweans that have fled their country looking for a better life. The unemployment rate at the camp is approximately 70%, and the children there are suffering – many do not eat from Friday afternoon until Monday morning when they go back to the creche.

Diane and Lawrence begged the city of Rayton to let them rent a building next to the camp that had no water and no electricity, and the city eventually allowed them to do so. They started with absolutely nothing – just an empty, unheated, uncooled building that had a leaky roof.

They now provide care for 20 kids from this squatter camp (limited to 20 by government bureaucrats – no, really), as well as a garden so that the people at the camp can come pick some veggies and eat. We felt compelled to help these people, as they have given themselves for the service of others – Lawrence works the night shift at a call center, then works all day at the creche with Diane.

With the money provided, we asked them what they needed most. First on the list was mattresses – the children have nowhere to sleep but on the cold concrete floor (and dirt floors at their ‘houses’). Mattresses are very expensive – the cheapest we found anywhere was at a store in Pretoria, and they were still R120 each (after talking them down from R128). We bought 20. 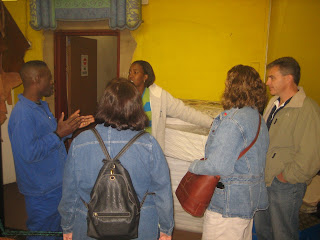 We then went looking in Chinatown for cheap Chinese clothing, but found almost no childrens’ clothing anywhere. We finally found track suits for R45 each, which will keep the kids warm at least.

Something I didn’t even consider is the fact that these were “new”. These kids have never had anything “new” in their lives, ever – everything is handed down. The fact that they each got new clothing is significant to their psyche, both in that the children know someone cares enough to get them something “new”, and that maybe, just maybe, they don’t have to start on drugs or alcohol and live out their lives scrounging for food in a dump – that maybe there is something better out there for them. The last significant part is of course that many of these children have HIV/AIDS and will not live past the age of eight, so having something new can bring a little light into their very short lives. 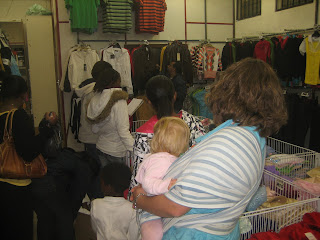 Here is the baakie, full of stuff for the kids! Diane is on the far left (the black woman), then Francis (the Afrikaner) – she is the missionary who is committed to helping the creche, is our main contact, our friend, and my ministry supervisor. Then comes April, Mary, Mary’s new friend (Diane and Lawrence’s four-year old daughter, whose name escapes me at the moment), John, another daughter (there are three daughters total), Vin, Lawrence, and Gordon. 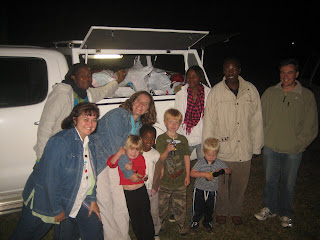 Here is the danger of having no electricity in the creche – when one loads in foam mattresses wrapped in plastic, the heat from candles will sometimes ignite the plastic. Ten mattresses up in smoke. Luckily only half of them burned, so they will cut the foam in half and use the unburned half for the babies (or pillows). That was about $144 bucks – bummer. Guess someone didn’t like good being done in the world – could it be, oh I dunno, Satan!?! 🙂 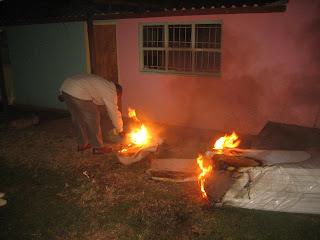 In any case, when we arrived home, we found out that someone had just given my mom another $145 – almost the exact replacement cost for the burned mattresses, nearly to the penny. God is good. Real good. And so are all y’all who donated so generously to help those in need!

One thought – it’s one thing to give money to a cause, and you have no idea to whom or to where it goes – it’s quite another to see pics of the people to whom you gave money purchasing things with your money and delivering it directly to the people who need it, isn’t it? Thank you all, and may God bless all y’all richly and abundantly! If you feel compelled to give more, do it, and we’ll make sure it gets to these folks! 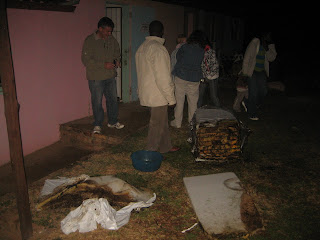