Being a Knight of Columbus, I have been involved here with our brother organization, the Knights of De Gama (a Portuguese explorer who went around the horn of Africa). Their annual fundraiser is a chicken braai, wherein we serve around 1200 plates of half chickens, potato salad, and green salad. I was on braaing duty by the grills.

The chili day the night before ran a little late, so I arrived shortly after 8 a.m., when I was supposed to be there at 7 a.m. I made up for my tardiness by working until the thing was over (after a two-hour diversion to take the wife and kids to Mass) at around 5 p.m.

That’s Joe there manning the grill, a bucket of raw chicken halves resting on the ground behind him. Let me tell you, Knights worldwide are all the same – I was greeted with chorizo sausage on a bun, a couple of spare ribs, and a cup of Old Brown Sherry, because it “will make your toes warm”. Oh, and the guys were out there drinking beer at 8 a.m. – just like home! It was a fantastically successful event – we completely sold out of chicken! 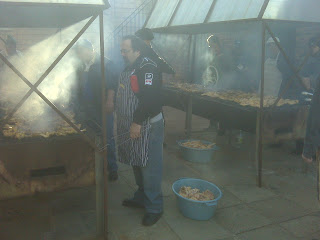 The event was held at a place that I figure my dad would appreciate, being that he went to Christian Brothers High School. Here we have the entrance to the chicken braai, held at none other than Christian Brothers College in Lynnwood (Pretoria). Small world, no? It just serves as one more reminder that Catholic really does mean universal. 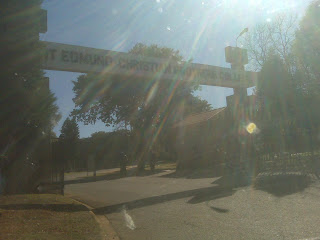