I started this morning out with a chicken and cheese spread omelette. Doesn’t sound appetizing, but it was pretty decent, I must say. 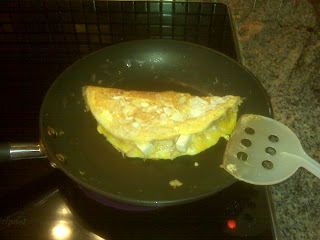 Here is what our refrigerator looks like before we go shopping on Fridays. That’s one boiled egg on the top (turned out to be spoiled), a can of tonic water left over from Mark and David’s visit, a jar of pickled veg, a bottle of marula jam (also from when M&D were here), some German mustard (mittlescharf), a jar of Peppadwes (TM) – pickled peppers, and some “mustard sauce”. They seem to not have regular yellow mustard here – it’s either mustard sauce made with sugar, German mustard, or hot English mustard.

On the next row we have All Gold Tomatie-Sous (they call ketchup tomato sauce here), some salad dressing (nasty), French’s yellow mustard from Texas, Miracle Whip Light, Italien dressing, Sweet Chili sauce (we will miss you), fruit chutney, and Monkey Gland sauce (sounds nasty but is a BBQ sauce made with some fruit and a little spice – quite nice actually, but terrible name).

Lastly, we have a jug of 100% apple juice, a Kool-aid pitcher, a 2 Litre of TAB (yes!), an Erdinger Hefe-weizen, and some Ultra Mel vanilla custard, which the kids enjoy putting on their Saturday morning pancakes. It’s yummy, especially when mixed with syrup, raspberry syrup, and strawberry yoghurt. Just ask the kids! 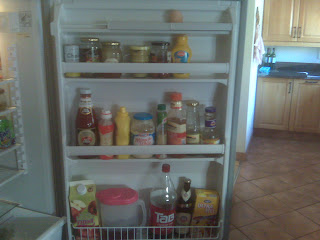 OK, so actually IN the fridge we find: a coffee jar filled with leftover green beans, a Miracle Whip jar filled with spahgetti sauce, more marula jam, strawberry jam, tomato chutney, beef mince in a pickle jar, some other jars, a bottle of Bandito’s Jalapeno hot sauce, and Bushman’s Bush Fire hot sauce. Next there is a tub of feta cheese and some random olives. Next row we have some leftover chicken breast, a jar of pepper dip, some Flora margarine, two bottles of cheese sauce, one garlic, one chili, and some Fanta Sour Apple sodas. On the next row one sees my tray of interesting goat cheese – one with peppercorns and one with tomatoes. Below that is an empty margarine container with creamed spinach inside. In the drawers one sees some cheese sausages, a tube of pfefferwurst, some random cheese spreads, and lettuce. Interesting, no? Nothing like our fridges in Texas! We eat everything we buy and very little goes to waste. 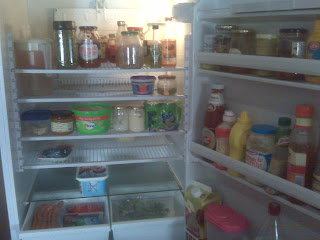 Remember the huge Coke display I showed in a few posts back? Here it is a few days later. I don’t know who the chick is – she was walking by and stopped right when I was ready to take the picture. 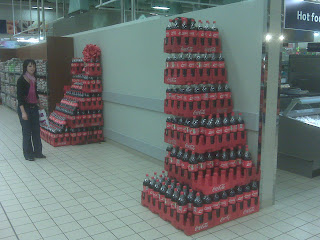 Being Friday, I decided to treat myself to a couple of beers. The first was Bavaria Draught. It tastes like soap – ugh. 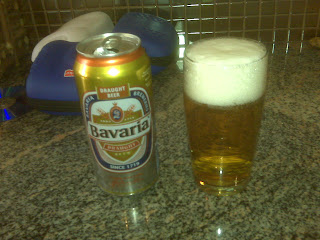 Then came the microbrew Drayman’s Goblin Bitter. Not a bad beer, but I can’t get over the flavour instilled in the beer from the plastic 1 Litre PET bottle. 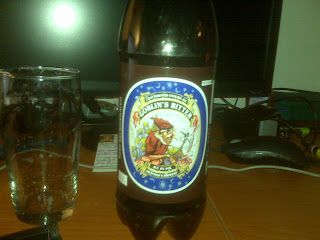 Sarah has decided recently to up her cuteness factor by praying before meals with the family. She clasps her hands and waits patiently… 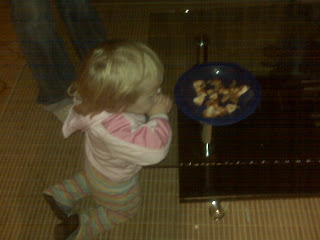 …for the pizza mommy made by herself since daddy was on a conference call. The leftmost is a meat supreme with two types of salami, the right side is chicken, grilled onions, coriander, and sweet chili sauce. Yummy! The kid’s pizza had some beef mince on one side and cheese on the other. April did an outstanding job! 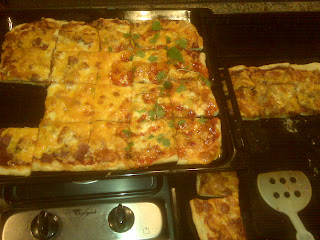